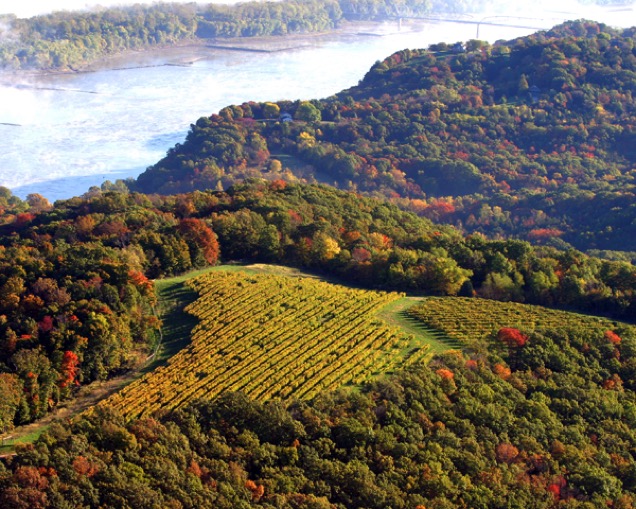 "SHOW ME SOME WINE FROM MISSOURI"

A Weekly Tasting of Missouri Wines, Makes a Full Case for Quality

In the beginning, there was an influx of German immigrants to the Missouri River valley in the 1830’s. They established vineyards and wineries due to the ideal growing conditions for grapes. By the late 1800’s they were producing over 2,000,000 gallons, the most of any state in the nation. Stone Hill winery in Herman became the third largest winery in the world. They were shipping a million barrels of wine by the turn of the 20th century. And, these wines were winning major awards in Europe and in the states. Another event helped put Missouri on the wine map. In the mid-19th century, the phylloxera louse destroyed much of the Vitis vinifera grape crop in Europe. Charles Riley, Missouri’s state entomologist, discovered that American rootstocks were resistant to the pest. As a result of his discovery, Missouri sent millions of rootstocks to vineyards,   around the world, that had been decimated by phylloxera. Guess what? This saved the French wine industry as well as others.

Before Prohibition, Missouri was the second largest wine producing state in the nation. In 1965, Stone Hill Winery reopened heralding the return of wine for the table to Missouri. Winemakers began emerging and reestablishing along the river and throughout the state. The federal government started to recognize that the wine industry was an important factor in the nation’s regional economies. In 1972, the first American Vinicultural Area (AVA) certification was issued by the federal government was issued to the region. Progressively distinct AVAs were recognized. The Augusta AVA in 1980. The Hermann AVA in 1983 and so on.

Today, the Missouri wine industry is growing rapidly. There are more that 1,600 acres planted in grapes. By 2009, 97 wineries were producing Missouri wines. By 2016 the count was over 126. Missouri is home to over five wine trails taking visitors from winery to winery producing a wine tourism business for the state.

WineLineRadio is a production of Juris Corporation •  Copyright 2018, all rights reserved

Robert, Annette Alden and Rosemary Frank discuss the history of wine in Missouri

Nothing fancy here, just good old American Concord grapes making an age old favorite. If you like a sweet wine for a change, give it a try. At 7.99 a bottle it's easy to get seduced.  Stone Hill Winery's traditional favorite is a sweet, rich red wine bursting with the robust flavor of ripe Missouri Concord grapes. Make your own wine spritzer with Concord and sparkling grape juice.